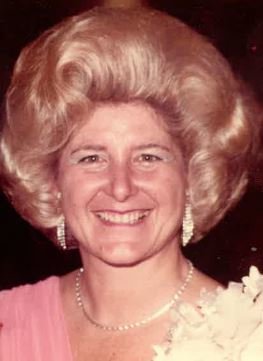 Estelle Rose Brucato passed away from heart failure on October 26th at Community Hospital in Monterey.

She was born in Monterey to Vince and Mary Catania. She attended Monterey High School.

Upon graduation she met and married George Brucato of Monterey. She worked at Bank of America for over forty years. She particularly enjoyed helping people obtain loans.

She enjoyed traveling with family and friends. Her gang included notable Monterey names such as LoManto, Russo, Golding, Magner, Lofink, Campos, and Rotter. They traveled the country watching golf tournaments from Coast to Coast. She travelled to Hawaii, Mexico, France and Italy with her family.

She was a loving mother and would do anything for her children and grandchildren. Her giving nature did not end with her immediate family.

Upon her retirement she perfected her creative knitting talent. She gifted countless family and friends with her beautiful hand-crafted blankets, each lovingly personalized with their name.

She was loved by so many friends and family. She had a particular fondness for her many nieces and nephews and their children.

She is survived by her brother Vince (Lynn) Catania and sister Johanna LaSala and sister-in-laws Melba and Marylou Catania, and her children Jerilyn (Matt) Albert and Renee (Dahn) Davi-Walker of Monterey, Frank (Corrie) Brucato of Los Altos, twelve grandchildren and four great-grandchildren.

To send flowers to the family or plant a tree in memory of Estelle Brucato, please visit Tribute Store