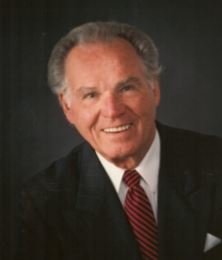 Rev. Wayne M. Adams, beloved Pastor and faithful servant, went to be with his Lord on Thursday, January 28, 2021, at the age of 91 years. He was born on Oct 16, 1929 in Sonora, CA to Neola & Merle Adams and had five siblings: Vione Pauls, Oakley Adams, Frank Adams, Donna Myovich and Chaplain Richard Adams. All pre-deceased him.

He received his education in the California Public School System and at Vanguard University. He was ordained in the Christian Ministry in 1954. His ministry has included pastorates in California, Oregon, and Washington. He also served for five years as Director of Youth and Christian Education for 200 churches in the state of Oregon.

He met his future bride, Patricia Junker, in seventh grade, and they married on August 27, 1950. God blessed them with 68 years of marriage and they were totally devoted to each other and to their call to the ministry. His beloved wife predeceased him in Oct 2018.

Active in civic, educational, and political affairs, he served on the Boards of Directors of United Way, Children’s Home Society, Chambers of Commerce, Kiwanis International, Suicide Prevention, Boy Scouts of America, and several Ministerial Associations. He was a Charter Board Member of Leadership Monterey, a past president of Pacific Grove Kiwanis Club, and a past President and past Campaign Chairman of United Way. He has served on Mayors’ Commissions for various projects in the cities of Pacific Grove, CA and Vancouver, WA. He was appointed by then Governor Dan Evans to serve on the Washington State Committee on Law and Justice. He has worked in an advisory capacity for Fellowship of Christian Athletes, Y.M.C.A., Young Life, and other organizations.

In a 1997 survey conducted by The Monterey Herald, he was recognized as one of the most influential religious leaders in Monterey County. In 2002, he was given the Boy Scouts of America Humanitarian Award for his many years of outstanding community service.

Rev. Adams was the Founding Pastor of Cypress Community Church, a non-denominational congregation, where he served and ministered for 32 years. Cypress was founded in 1972 and is located on Highway 68 at Corral de Tierra, Salinas CA. From the beginning and with the help of a very small group of “dreamers and doers,” it grew into a thriving community of believers committed to faith, fellowship and service. During the years of prayerfully following God’s leading through the challenges of building that church from the ground up, Pastor Wayne often led his growing congregation in singing, “Nothing Is Impossible When You Put Your Trust In God”. . . and he believed that with all his heart! He was always an enthusiastic and passionate communicator of God’s Word, and his weekly Biblical messages of love and grace were a great source of inspiration and hope to all who came to worship. At the end of each service, Pastor & Pat would personally greet each person at the door as they departed, offering a warm smile, handshake, and words of encouragement. Truly a blessing to be counted on each and every week for decades!

After 51 years of ministry, Pastor Adams retired in May of 2005. He then founded Hands of Hope International, a non-profit religious and humanitarian corporation, where he served full time without pay as the President. He continued to speak to churches and groups throughout the U.S. as well as travel to many foreign countries to assess and respond to many needs in our hurting world. As the U.S. Representative for Seeds In HIS Garden Children’s Home for abandoned children in Nairobi, Kenya, he made regular trips to Africa and continued to raise funds for its support. He also continued to conduct worship services, weddings, funerals and was always available for prayer and counseling.

He was always a “hands-on” and enthusiastic leader, enjoyed sports and bicycling with his family, meeting with his “Old Friends” group for lunch each Thursday, and appreciated the splendor of God’s creation here on the Monterey Peninsula. In 2019, he marked his 90th birthday by skydiving with his son-in-law and grandsons to raise funds for Seeds In His Garden Children’s Home in Nairobi, Kenya. Upon landing on the airfield, he was greeted with the cheers of many family, friends, and former parishioners gathered there to celebrate his long and exceptional life. He will be lovingly remembered for his faithfulness to God, his dedication to his congregation and community, his commitment to help the hurting in this world, and for truly “making a difference” in countless lives.

A Celebration of Life service will be held at a later date. Donations in his memory may be made to Seeds in HIS Garden Children’s Home, PO Box 12583, Fresno CA 93778. To send condolences or share a memory, go to www.bermudezfamilyfunerals.com.

To send flowers to the family or plant a tree in memory of Reverend Wayne Adams , please visit Tribute Store

Share Your Memory of
Reverend Wayne
Upload Your Memory View All Memories
Be the first to upload a memory!
Share A Memory
Send Flowers
Plant a Tree