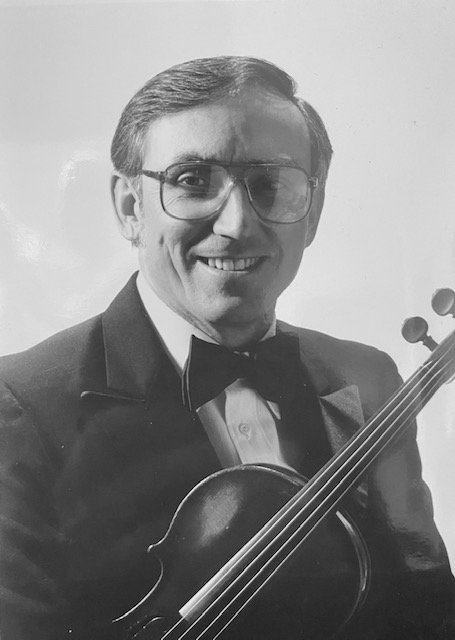 “Live each day and try to improve on the day before”

Owen Leonard Dunsford departed due to complications from a stroke on a beautiful February morning.  Facing the sun and caressed in his final moment by a gentle breeze from the Monterey Bay he loved, he passed with family at his side.

Owen is survived by his wife of 44 years, Rose Marie; sons Stephen and Phillip; daughters Margaret and Elizabeth; step-sons Robert, Donald, Richard, John and step-daughter Jeanne.  He is pre-deceased by his daughter, Katherine.  His legacy continues through 35 grandchildren and two great-grandchildren.

Owen was born in New Zealand and developed a love for the United States shortly after being fired from the local post office.  He committed the grave sin of receiving and sending telegrams when he was supposed to be stamping envelopes.  Coming to America in 1952 at the age of 17 with only an eighth grade education to his name, he endeavored to fulfill his life long dream of becoming a professional violinist.

Despite embarrassing himself in front of Jasha Heifetz (a legendary violin soloist and teacher) by knocking over a lamp stand in his excitement at a Taft Auditorium recital in 1956, he graduated from Miami University of Ohio in 1960 with a degree in music.  Shortly thereafter he was recruited to the Monterey Peninsula School District and began sharing his love of music in 1961.

He taught generations of students from 3rd grade through high school for the next 42 years in local schools.  His passion for teaching earned him recognition by the City of Pacific Grove in 1993 when he was recognized for his outstanding contributions to the field of performing arts.  He was also selected to the Who’s Who Among America’s Teachers” in 1994.

Owen’s involvement in California music extended beyond the classroom.  He was a private violin and viola teacher, longstanding assistant concertmaster of the Monterey County Symphony and participated in several music organizations.  He was the auditions chairman for the National Schools Orchestra Association and California state president of the American String Teachers Association from 1992-1994.  He also served as the string adjudicator and clinician with the Northern and Central California Music Educators Association.

He was always inspired by his students who succeeded in their chosen profession and was proud to have been a part of their lives.  His students went on to fulfill roles in all aspects of life becoming university professors, doctors, lawyers, military officers, music educators, spouses, parents, grandparents and many others.  While some did not choose a career in music, they were all influenced by their love of it through “Mr. D”.

Following complications of a career ending stroke, Owen spent his final years at the Del Monte Assisted Living Facility in Pacific Grove.  There he continued to touch others through his humor, love of music and good spirit.  His family would like to thank the staff of the Del Monte for all of their wonderful support and care.  Their nurturing environment fostered a spark that kept Owen young at heart.

Owen’s passion included a love for amateur radio and morse code.  To the everlasting joy of his wife, he mounted a 32 foot radio tower to the roof of their home.  With this he bounced signals off of the ionosphere to freely communicate from his teaching studio in Pacific Grove to exotic locales in Russia, Brazil and cruise ships across the Pacific Ocean.  His callsign, WA6IWU, is forever etched into the minds of those who dared ask what it stood for: “Whiskey After Six, Itchy White Underwear”.

In the days before podcasts and cell phones, Owen modified his vehicles with radios and antennae to the great joy of his children.  Not only used for traffic reports or to chat with other radio operators while on a road trip, he would call his wife at home on her landline telephone to check in while running errands.

For those he loved, Owen would always conclude his farewells by saying “73s and 88s!”. “73” is an old telegraph code meaning ‘best regards’ and “88” is radio code for ‘hugs and kisses’.  Never forgetting his roots at the New Zealand Post Office and expressing the love he had for others, this farewell was his signature, along with his smile.

To send flowers to the family or plant a tree in memory of Owen Dunsford , please visit Tribute Store

Share Your Memory of
Owen
Upload Your Memory View All Memories
Be the first to upload a memory!
Share A Memory
Send Flowers
Plant a Tree