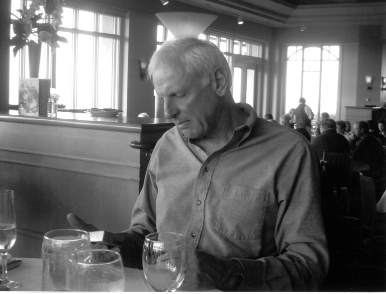 Gregory John Franks was born on February 3, 1942 in Cleveland Ohio to Jerry Franks and Elea-nore Paul Franks at 9:15 in the morning at University Hospital in Cleveland. Both of them were 26 when Greg was born.

For his early years he lived in a small, ethnic suburb of Cleveland called Newburgh Heights. Then the family moved to Parma, a new suburb, southwest of Cleveland. There he went to St. Charles school, a K-8 parochial school. From there they moved to Akron, Ohio where Jerry had bought a house. Those were some happy years for the family and Cindy (Cynthia), Greg’s younger sister was born in 1946. Eventually the family bought a new house in Cuyahoga Falls, Ohio which is located south of Cleveland, near Kent, Ohio.

Greg went to Holy Family grade school and to Hoban High School (a Catholic High School run by brothers). He had some close friends in high school and dated. Those were good years.

Greg was the first one in his family to go to college having been accepted at Ohio University in Athens, Ohio. He majored in Business Administration, but his heart was not in it. He was inter-ested in the Army and joined the ROTC at Ohio University, distinguishing himself over the years. Eventually he graduated with a Distinguished Military Graduate award. Only one other person in his graduating class received a DMG, that person went into the Marine Corps. Greg choose Army. He wanted Infantry, but got Artillery for which he was soon grateful. He did get his Busi-ness Administration Degree and graduated in June of 1962.

He met his wife, Susan Katherine Otto, at Ohio University. They fell in love and were engaged in February of 1963 with wedding plans for after he graduated from Airborne and Ranger schools. He was off to his basic Artillery course after the graduation ceremony in June of 1962. Went through Airborne and Ranger school and Susan and Greg were married on November 30, 1963 and were off to see the world. Their first assignment was to Ft Bragg, NC to the 82nd Airborne. Those were some fine days. Their first son, Jeffery Alan Franks was born on April 16, 1965.

In May 1965 Greg went to Viet Nam for the first time six weeks after Jeff was born. He was as-signed as an advisor in the Mekong Delta to the ARVN, (the Republic of Viet Nam army). Specifi-cally in An Khe Province. He was very successful in his interactions with the Vietnamese soldiers as well as civilians.

From there we were sent to Chiengmai Thailand where Greg was again an advisor in Jusmag to the Royal Thai Army. That was in 1968. We had a most wonderful tour of duty in Thailand. I was in Thailand for three years; Greg for two. The difference was that I chose to stay in country while Greg went on a second tour to Vietnam with the 4th Army. Our daughter, Jennifer Edith Franks was born on December 16, 1970, just days before Christmas. Greg was able to come home for Christmas 1970 to see his new daughter.

We all left in 1971 and were assigned to White Sands Missile Range in New Mexico where Greg served in research and development. We had to live on White Sands because of the critical na-ture of the assignment. Our second son, Alec John Franks was born on December 31, 1972 at the small Army hospital during a blizzard.

In 1974 we finally got to leave WSMR, something I had been looking forward to for years. Greg was assigned to Ft. Bragg, NC back to the 82nd Airborne. We could not have been more thrilled. Again, those were some excellent years.

From Ft. Bragg, we got orders to Verona Italy with NATO with language school first at the De-fense Language Institute in Monterey, CA. Wonderful time. We got to Verona in January 1978. It was an ideal place and situation.

After our three years there, we came back to the states with an assignment to Ft. Old, specifi-cally to the Combat Experimentation Command (CDEC) where Greg again was in Research and Development.

Greg left the service in June of 1984 after 21 years of service.

From there he went to work as a stock broker, but the crash of 1987 ended that career. So he went back to work at CDEC as a civilian, working there for ten years.

Then, we got into the wine business. We sourced our grapes from Edna Valley and Rancho Sisquoc and made our wine at a custom crush facility in Santa Maria - the first such place in the nation. Our brand was called Tin House and we made all reds, Pinot Noir, Cabernet Sauvignon, and Syrah. Our first release was in 2000 of our 1998 Pinot Noir - big hit. Our first Cabernet Sauvignon (1999) was voted best cabernet in California at the California State Fair, the first year it was released. What a thrill that was. We had a different tin house for each brand and a story about how the character of the wine was reflected in the tin house on the label.

We made our last wine in 2010. Greg was not able to make the wine any more because of the Alzheimer’s disease.

To send flowers to the family or plant a tree in memory of Gregory Franks, please visit Tribute Store

Share Your Memory of
Gregory
Upload Your Memory View All Memories
Be the first to upload a memory!
Share A Memory
Send Flowers
Plant a Tree