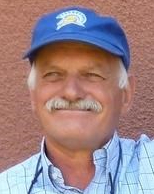 Joseph Richard Rock
August 23, 1954 - January 17, 2021
Pacific Grove
Joe died peacefully in his sleep after a three year courageous battle with prostate cancer. Dr. Koontz from Pacific Cancer Care, Dr. Larry Fong from UCSF and Dr. Paul Corn from MD Anderson were on his incredible team.
Born in Idaho, Joe and his family moved to Monterey when he was five. He went to MPC and Cal Poly where he studied architecture and studied abroad in Florence for a year. Thus began his life-long friendships with what he called 'il Gruppo', 50 fellow students who explored and developed their potential while there. After the program ended, he went back to Italy to work in an architectural firm for an additional three years.
In 1986, he opened his own office in Pacific Grove. A one-man shop, he loved to draw and so never made the leap to CAD. In fact, he taught drafting at MPC and Hartnell. He sat on the Architectural Review Board, the Planning Commission, Historic Resources Committee, did pro bono work for the city, volunteered for the rec dept. as a timer for track and field, and was a soccer coach for his son's team for many seasons.
His work included homes, remodels, and commercial properties all over the Peninsula. With his friend and landscape architect Scott Hall, they did several projects for the City of Carmel, including Vista Lobos, Rio and First Murphy Parks as well as safe access to Carmel Beach.
While his self-identity was that of an architect, when asked what he was most proud of, he said his kids. He loved being a dad and was good at it.
He was also an incredible rock climber – always teaching others with his knowledge and sense of safety. As a dad, husband, college instructor, friend and climber, he was always teaching.
When asked what message he wanted to pass onto his grandchildren, he told us, "be kind".
He had a quirky sense of humor and an innate curiosity. He would talk to everyone wanting to know their story and searching for answers to his many questions. His quest for life-long learning was quenched by his love for the Pacific Grove Library. He asked that any gifts made in his memory be made at https://www.pglibraryfriends.org/ways-give-library/

He leaves behind his wife of 36 years, Robin Venuti, children Giordana (Reece Stewart) and Stefan Rock, siblings; Hank, Kathleen Stallworth, Janet Miedema Grant, Dan and his Mom, Lois Rock.
A small graveside service at El Carmelo took place with hopes we can have a celebration of life at another time.

To send flowers to the family or plant a tree in memory of Joseph Rock, please visit Tribute Store

Share Your Memory of
Joseph
Upload Your Memory View All Memories
Be the first to upload a memory!
Share A Memory
Send Flowers
Plant a Tree