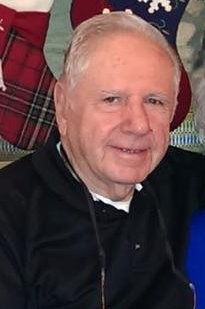 A lifelong resident of Monterey, Peter Joseph Torrente, 91 years of age, was the son of the late Mariano and Mamie (Ventimiglia) Torrente. Peter passed away peacefully at home on June 8, 2021, surrounded by his family, after a courageous battle with liver cancer. Peter met the love of his life, Maryann (Abbati) Torrente in high school, they married on June 10, 1951, at San Carlos Cathedral in Monterey. This past June 10th would have been their 70th wedding anniversary.

Peter is a graduate of Monterey High School and Monterey Peninsula College. Right after college, he joined the Coast Guard from 1951-1953. In his younger years, he fished in Alaska with his father, Mariano Torrente. Peter was the former owner of the Waldorf Bar on Alvarado Street in Monterey and later was the owner/broker of Peter Torrente Real Estate for 36 years before retiring. During his career, he was the 1983 Treasurer and 1984 Director for the Monterey Peninsula Board of Directors. He also was presented a plaque in appreciation from the City of Monterey for outstanding service from 1974 to 1978 as a member of the Planning Commission. His memberships include the Compari Club where on April 21, 2016 he was presented with a Lifetime Membership Award and he was also a member of the Amici Club. Peter was a member of the “Team of the Century” 1948 Toreadors, he was named All-Conference Lineman of the Year in 1951, and was inducted into the Lobo Hall of Fame for Monterey Peninsula College in March 1999. He was a major sponsor of athletics at Monterey Peninsula College.

Peter and MaryAnn were always on the go. They enjoyed walking daily around Lake El Estero, enjoyed traveling, went on many cruises, and loved to go to Italy. They also went on trips to Las Vegas and enjoyed taking road trips to Lake Tahoe. Peter was a high-stakes winner at Harrah’s in Lake Tahoe. In their recent years, they enjoyed going out to lunch and then going see a good movie. Peter loved going to his Amici Club in the mornings and spending time with friends there.

Our Dad and Nano was our patriarch, he will always be thought of with so much love, admiration and respect. He will never be forgotten.

The family would like to give special thanks to Dr. Nancy Rubin and Dr. John Hausdorff in Monterey, Dr. John Louie of Stanford Hospital and hospice nurses Deidra and Anna. In lieu of flowers, donations can be made in Peter’s memory to Hospice of the Central Coast, St. Jude Children’s Hospital, or the organization or charity that is meaningful to you.

A Funeral Mass will be held on Tuesday, June 15th at 9:30 a.m. at San Carlos Cathedral. A private burial with only immediate family members will follow at San Carlos Cemetery.

To send flowers to the family or plant a tree in memory of Peter Torrente, please visit Tribute Store

Share Your Memory of
Peter
Upload Your Memory View All Memories
Be the first to upload a memory!
Share A Memory
Send Flowers
Plant a Tree