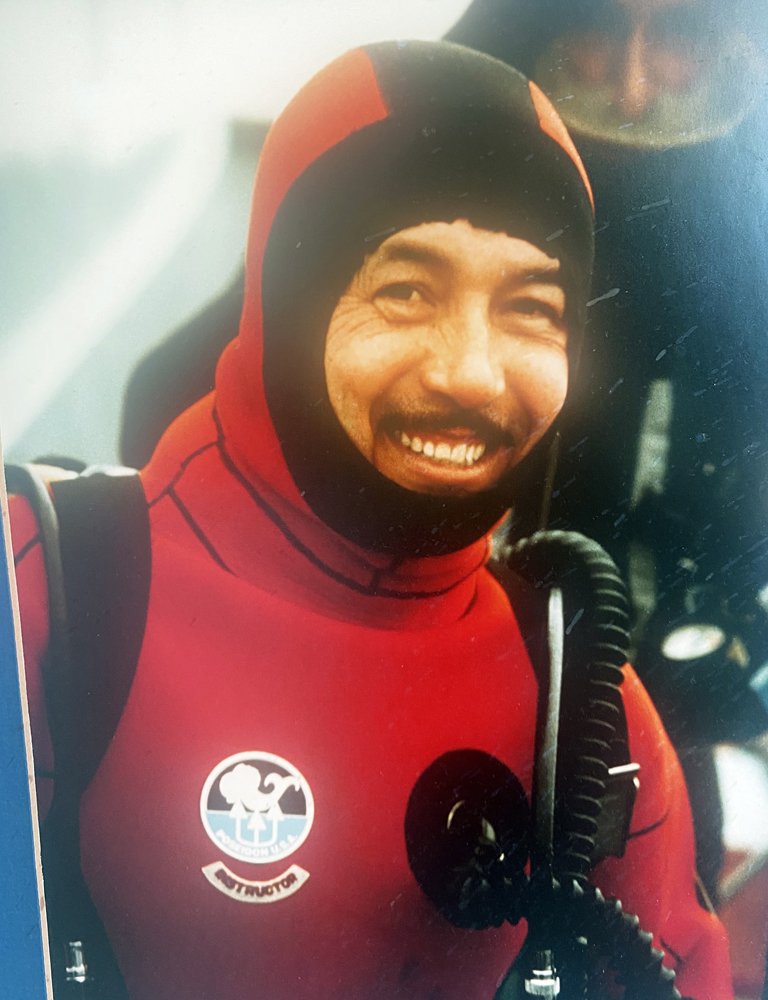 Alessio, Al, was born November 1, 1938 in San Luis Potosí, Mexico. He was a happy, busy kid, always eager to learn and explore. He describes his childhood education as excellent - his photographic memory helped. He went to work at age 12 to help his parents make ends meet. He held many jobs during his early life - from selling stationary and newspaper printing to mailman and payroll assistant. He served as a sergeant major in the Mexican army and was a polished luchador (wrestler), La Bestia Negra. After his family of seven moved to Mexicali in 1952, he disliked the desert heat and begged his Tio Roberto to let him work for him in Oakland, California at a candy-making store. At 18, he traveled from Mexicali to Oakland with his shirt on his back on a Friday to start work on Monday morning. His work ethic and dedication to perfection served him well. He went straight to class to learn English and become a US citizen and could always recite US history better than most. His love for fine candy making and cooking carried on throughout his life; he was the go-to for taste testing and you knew it was good when it was Al-approved.

He married at 23 and he and his first wife, Deya, had three children (Alessio Carlos, Patricia, and Janine). Their marriage lasted 16 years. He worked hard in San Bruno raising his young family. They spent fun times boating, water skiing, fishing, camping, participating in the kids’ sports and music hobbies, and he served as Den Dad and Cub master for his son’s Cub Scout troop. His children also helped him in the candy store.

During his confectioner career, he quickly learned that he needed exercise after being around chocolate all day. He signed up for a community college swim class to learn to swim. He loved it and followed it by taking a SCUBA class. He was quickly hooked. In the late 1970s, Al became a SCUBA instructor. He loved teaching people to SCUBA dive. He also attended the San Francisco Art Academy, and blended that education with a lot of self-teaching to become a fine underwater photographer and instructor. His “Spanglish” was heartwarming to his photography students who still giggle thinking of his charming accent explaining about a camera’s “F-a Stop-a”.

In 1983 he sold his stake in Shaw’s Candy and bought Aquarius Dive Shop in Monterey, California. He had a mechanical engineering mind, and enjoyed concocting solutions using spare parts. This talent helped him maintain the SCUBA compressors and dive equipment to the highest standards.Through the 80s and 90s, he enjoyed the heyday of dive travel and led many recreational group diving expeditions to some of the best dive locations throughout the world. He experienced momentous encounters with schools of hammerhead sharks, manta rays, and too many other peak underwater adventures to list. The highlight of his SCUBA diving career was when he met the love of his life, Laurie, on a live aboard dive boat in Baja California. They married in 1986, and together, they ran the businesses for 16 years, sharing many dive travel adventures before starting a family. Al participated in CMAS international underwater photography competitions in Cuba, Norway, and Spain. He even found a way to combine his two careers, chocolate and SCUBA diving, launching the California Chocolate Abalone Dive, an underwater scavenger hunt supporting the Pacific Grove Recompression Chamber, that took place for over 10 years in the 80s and 90s at San Carlos Beach.

They sold Aquarius in 1999, but he kept busy working with Monterey Peninsula Unified School District in their ESL adult education program. He was proud to give back to his fellow Spanish-speaking community. Semi-retirement also gave him the opportunity for many fun ski and dive trips with his family, now having two children (Monica and Brandon) with Laurie. A highlight trip was in 2006 when he took them to Europe for six weeks to find the heritage of his surname, Huelga. He also expanded his recreational running into half marathons. He completed several half marathons including getting first in his age group in the Monterey Bay Half Marathon at age 70. Although he eventually gave into his back and knees, he happily switched to biking, swimming, and golf. He remained in the running world by supporting the Monterey-Dubrovnik sister city relationship that included a cooperation with the Big Sur International Marathon Foundation that helped launch an annual Dubrovnik Du-Motion Half Marathon. He loved the relationships built with the Dubrovnik team family.

His true retirement started when he found his love for golf. He became a regular at Pacific Grove Links and Del Monte Golf Course, loving the game, but mostly the friends. His calmness, focus, intelligence, and humor made it the perfect way to spend his days. He was able to enjoy this part of his life for nearly 14 years. Of course after golf, he was always eager to get home to his very best dog friend, Finn.

Alessio was a devoted family man and was so proud of his children and their families. He is survived by his wife, Laurie, of 35 years; his five children: Carlos (Eloisa), Patricia (Daniel), Janine, Monica (Chris), and Brandon; grandsons Raymond (Dulce), Mitchell (Kelley), Michael, Nicholas (Kristen), Matthew (Christina),  Andrew, and Oliver; great-grandchildren Shiloh, Judah, Adelina, Emma, Kingston, and Ezra; sister Silvia; countless more beloved nieces, nephews, and cousins. Alessio will be missed by many others who became family through SCUBA diving, running, golf, and chance encounters. His family thanks his long-time doctor, Dr. Jeffrey Rice, the dedicated teams at CHOMP, and Hospice of the Central Coast. They also thank everyone for their unforgettable stories and heartfelt friendships throughout his beautiful life, and especially during his last few weeks. He was honored to know so many wonderful people.

Alessio will be missed beyond measure by so many; his laugh, whether at someone else’s joke or his own, his dancing, his off-key singing, his cooking, his words of wisdom, his suggestions to simply not worry, his photography and patient picture taking, his creative problem solving, his stories, his love, and his company. He was always the one to greet you with a warm smile and wish you to “have a nice day.” He always had a positive outlook and good sense of humor; he neither worried nor rushed, and he always appreciated the present, whether he was underwater, on the fairway, or at home.

A celebration of life is planned for fall and is still TBD.

In lieu of flowers, the family suggests donating to pancreatic cancer research at the Pancreatic Action Cancer Network, https://www.pancan.org/research/. Remembrance stories can also be sent to lauriehuelga@gmail.com

To send flowers to the family or plant a tree in memory of Alessio (Al) Huelga, please visit Tribute Store