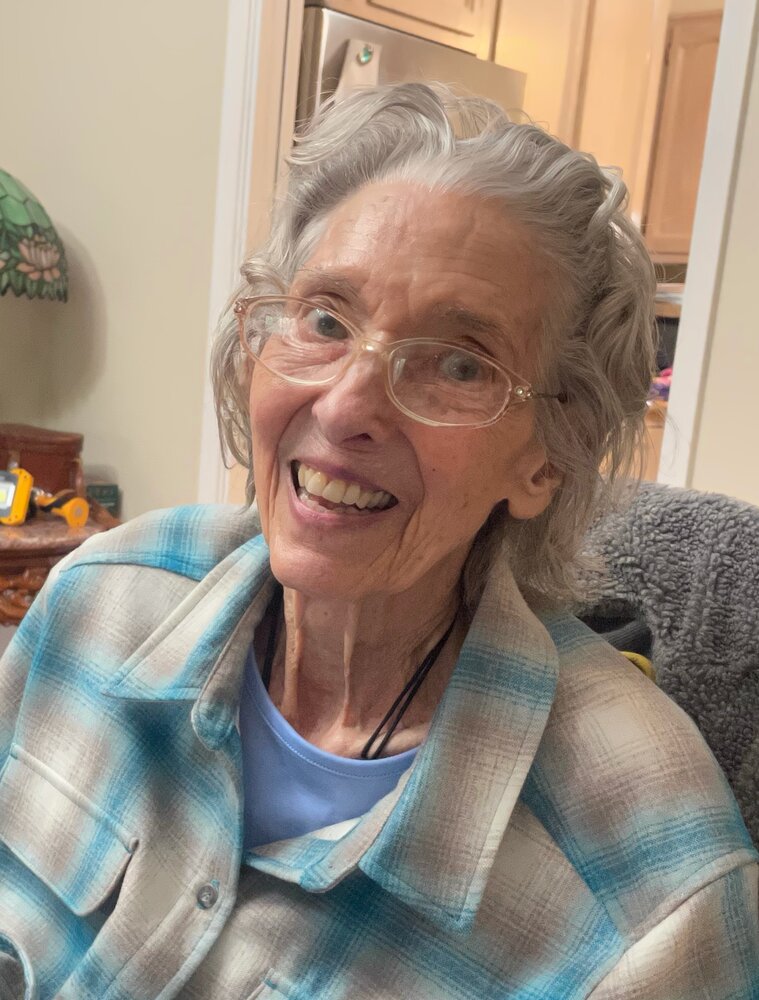 Valeria “Brownie” Willott went home to be with Jesus, her husband John, and her son Jim early in the morning of Tuesday January 25, 2022. She was an incredible person that blessed so many of us during her time here on Earth. We will miss her greatly, but we are so happy she’s free.

Valeria was born to Lester Earl and Ruby Dove (Kibbler) Dimit one month early on February2, 1924 in Pasadena CA. It was a cold winter and she was very small so her dad made a small heater to go into her crib. She was the sixth child in the family and since she stayed red longer than normal the other children began to call her “the brown baby” and the name stuck. She was a very active child, best called a tomboy. She would climb trees, jump off the roof and do almost anything else that her brothers dared her to do. To burn off the energy, at five years old she started acrobatics. When she was six, she rode on the Adore Milk float in the Rose Parade. She became very good at acrobatics, so her mother would drive her weekly to Hollywood to study with Stan Mitz at the Belcher studio. In 1935 at 11 years old, Brownie spent a month with Major Boze’s traveling show as an acrobat.

Brownie struggled in school, so for the 10-12 grades she attended Miss McCulley’s Girls School. The classes had only 6-8 students so she was able to do much better and graduated in 1941. After high school she attended Sawyers Business College to learn accounting and typing.

While in high school, she worked for her parents who owned L. E. Dimit Plumbing where she ran the pipe machine cutting and threading pipe. In 1942, a foreman from a defense plant saw her working the pipe machine and offered her a job in the machine shop. It was there that she met John Willott working the lathe next to her. He was asked to sharpen all the cutting tools in the grinder room. Shortly after he started in the grinder room he asked for Brownie to come help him.

They started dating in January 1943 and were married on October 12, 1943. While they were having pictures taken after the wedding, John’s mother called to tell them that John had been drafted. John said to tell them he was on his honeymoon and she did not know where he was. He did have to report for Navy boot camp as soon as he got home.

While John was off at war, Brownie was invited to be in two Gail Storm movies as a dancer. She and Gail were only two years apart and got to know each other well.

After John spent two years in the Navy on an island in the Pacific, they settled down together in Pasadena. Their first son Jim Les was born on September 6, 1946. Together John and Brownie built their first house in Sierra Madre. Eighteen months after Jim’s birth, John came into the world feet first a month early on March 25, 1948.

Once the boys were in high school, Brownie went back to work as a bookkeeper, first at John’s business, Aremac Associates and then at other businesses until John retired in1979. They moved to the redwood forest of Boulder Creek, CA and began to build their retirement home doing most of the work themselves.

Throughout her entire life, Brownie was kind and caring to others, starting with her mother-in-law Kathryn Willott in World War II and ending with being the caregiver for her husband for the last ten years of his life.

She treated all people like family, welcoming them into her life. She was always asking if anyone needed prayers. When she awoke in the night, she would say prayers for all those in need until she fell back to sleep. She shared her love of Jesus with all who met her. She listened carefully to them and then shared her wisdom with them.

Brownie was a strong and agile woman who helped her husband build five homes. She would do any job from shoveling dirt, laying bricks, pouring concrete, to painting the houses inside and out. She would help repair the road in Boulder Creek by riding the roller into her 80s. Brownie was a beautiful, strong, talented, and loving person. We are grateful and beyond blessed to have known her.

The family wishes to extend our sincere thank you to neighbor Ellen Ryan for her love, long time friendship and help and to Episcopal minister Rev. Marcia Lockwood for giving Brownie the last rites. We were also blessed by Robin Mancini for loving and caring for Brownie for the last two years and to the caregivers Mohini Singh, Nala Vi, Anjani Harvey, Leslie Ramirez and Enjoli Shannon for their tender care and love. The family sends you a special Thank You!

To send flowers to the family or plant a tree in memory of Valeria Willott, please visit Tribute Store