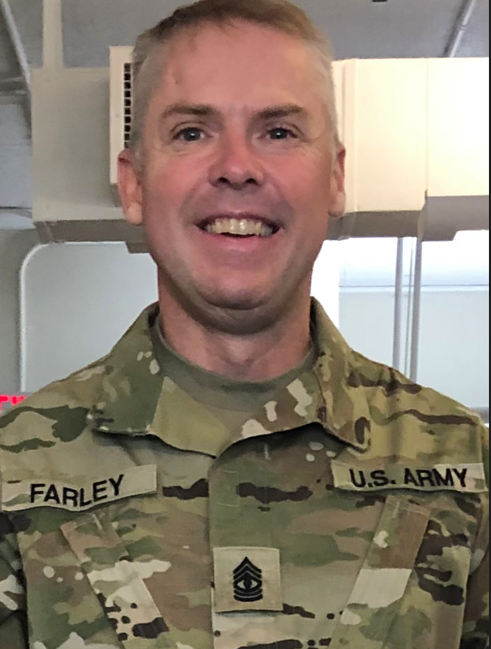 Dan is survived by his wife Orgina Farley, his daughter Alsacia and her husband Julian Contreraz and their five children; Kayden, Weston, Addison, Reagan, Rylee. His son Cameron Farley, and his step-son Murad and his wife Lena, their children Liam and Mila. His sister Jayme, her husband Marty Scholes, their four children. His sister Brandy and her husband Tanys Holguin and their four children. Dan’s father Daniel Farley Jr. and wife Chris Farley, his mother Cheryl Parks and husband Gerald Parks.

Dan graduated from Worland High School in Worland, Wyoming in 1990. After high school Dan attended Northwest Community College in Powell, Wyoming. Dan studied history at Columbia College in Denver, Colorado. Dan graduated from University of Northern Colorado in 1997 with a master’s degree in American History. Dan is a veteran of the Global War on Terror and served in Germany where he met his wife, Orgina. For his service, he earned the Army Commendation Medal, the Army Achievement Medal, and is a four-time recipient of the Army Good Conduct Medal. Dan served honorably on active duty in the Army from 1997 to 2009, and continued service to his county in the Army Reserve from 2009 to 2022 achieving the rank of Master Sergeant.

Dan graduated from the Defense Language Institute’s (DLI) Russian Program, earning the Provost Award for exceptional proficiency in foreign languages, and was recognized by the Pentagon for superior linguistic skill. Dan was the top linguist in the 66th Military Intelligence Brigade from 2005 and Best linguist of year 2006 and was also fluent in Serbo-Croatian, German, and Pashto. Dan valued education, and he had an insatiable intellectual curiosity. He often said there is something to learn about everything and completed three master’s degree programs. Dan was kind, gentle and thoughtful. He served others first and his selflessness will be missed by his friends and family. Dan and Orgina enjoyed walking together on the beach and wine tasting in central California.

Dan continued to serve as a Military Language Instructor at DLI in 2015 and returned in 2022 as an instructor. Dan’s family will retain his ashes, his Army Reserve unit will hold a military memorial service on August 6, 2022, in Camp Parks, CA. The family’s memorial service will be held at a later date. In lieu of flowers, donations can be made in his name to The American Foundation for Suicide Prevention.

To send flowers to the family or plant a tree in memory of Daniel Farley, please visit Tribute Store

Share Your Memory of
Daniel
Upload Your Memory View All Memories
Be the first to upload a memory!
Share A Memory
Send Flowers
Plant a Tree