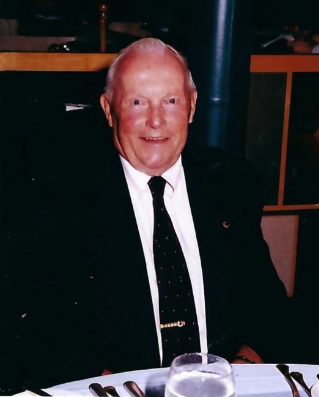 Young, Lyle Everett, MONTEREY, CA passed away on July 18, 2022 at Community Hospital of the Monterey Peninsula. He was 93 years old. Born in Oregon on June 26, 1929 to parents Raymond Young and Maude Mohler Young. He was the youngest of three siblings. Lyle graduated from high school and signed up for military service in the Air force for three years. As his release date drew near, America was at war and he was denied release, staying in the Air Force three more years during the Korean War.

When Lyle left the military, he was hired by a company that installed gas meters and air conditioners. The employees met and voted to start a union, voting Lyle as their spokesperson. He was able to represent the company and the employees.

Lyle married Lois Louise and had three children; Stephen, Stephanie and Erin. He cared for Lois during a six year battle with cancer. He was widowed for several years and met Anne Simmons at an “Alone Together” meeting. After ten months of dating, they were married in 1991.

Lyle had started a company that sold wholesale cactus and succulents to businesses in Fallbrook, CA. After several years operating this business, he retired. In 2006 he moved to Monterey to study “Science of Mind”, joined the Salinas Valley Art Association and was a prolific painter of landscapes.

He is survived by his wife of 31 years, Anne and his three children. A memorial service is planned for September 17, 2022 at the Monterey Center for Spiritual Living, 400 W. Franklin Street, Monterey, CA at 11:30 am. Luncheon reception immediately following the service. The family suggests donations to your favorite charity.

To send flowers to the family or plant a tree in memory of Lyle Young, please visit Tribute Store

Share Your Memory of
Lyle
Upload Your Memory View All Memories
Be the first to upload a memory!
Share A Memory
Send Flowers
Plant a Tree