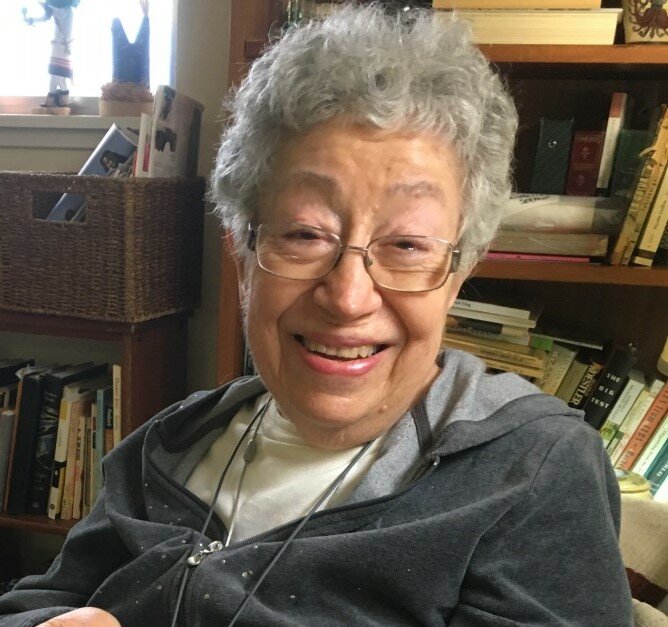 Rebecca Danon Hetter passed away in Monterey, California, on November 22, 2022. She was 86.

Becky was born to Samuel and Victoria (Levy) Danon in Pinar del Rio, Cuba, on July 29, 1936, the first of their two children. Her parents, both Sephardic Jews, had immigrated from Turkey, then part of the Ottoman Empire, to Cuba as young adults.

Her father was the accountant for a tobacco trucking company, and she was raised in Pinar del Rio (one end of the trucking line) until age 12. Then her family moved to Havana, which was the other end of the trucking line. She was annoyed at the move, since she had hoped to live in a boarding house for college rather than with her parents.

She started at the University of Havana in 1953. Delayed by the university shutdown in 1957-8, she received a bachelor’s degree from University of Havana in 1959. During that time, she also taught math and physics at "Colegio Hebreo de la Habana" from September 1956 to November 1960. She started her graduate work in mathematics at the university, finishing her course work but not her dissertation by the time she left Cuba for the United States.

She had been required to take piano lessons as a child, and found many friends and a life-long love of classical music as a result. She said later that she was most proud of fundraising that brought a grand piano to the University of Havana.

Becky had a plane ticket for the day the airports were closed down, so she found a ride on a friend’s entertainment boat to Key West, Florida. She had to leave almost everything behind but somehow managed to collect pictures, a diary from her teen years, the poetry of Jose Marti, and “Cocina al Minuto” (the Cuban cooking bible) in the United States. The pictures were sewn into dresses and sent by letter, but it’s a mystery how the diary and cookbook got out.

She joined her cousin Dr. Julio Levy, who was doing a fellowship in Cleveland, Ohio, where she applied her math skills to using fabric as economically as possible in a suit factory. She and the Italian suit makers bonded over bad American coffee and good espresso. Between 1962 and 1965, she took assorted classes in computer languages and psychology at Fenn College, Cleveland College at Case Western Reserve University, and Cuyahoga Community College. She used her math and computer skills working at Case Western Reserve on early versions of large IBM mainframe computers.

In Cleveland, she met her future husband, law student Frederick Hetter, who very slowly helped her with her immigration paperwork while he worked up the courage to ask her out. She also joined the Congress of Racial Equality (CORE) and started investigating slum lords and picketing for civil rights, dressed in her best clothes. She did all this before she had a green card, leading her boyfriend to plead for her to stop until he made her residence permanent. “Hurry up,” she told him.

The couple married in 1965, and they moved to San Diego in 1968 for Fred to finish his law degree. Their daughter Katia was born in 1969. She joined with other parents to create the Yellow Submarine preschool, following the free school movement that was pioneered by A.S. Summerhill in England. She and her daughter both made many lifelong friends through Yellow Sub.

Becky started working at UCSD’s computer lab when the entire university was just three buildings and earned a master’s in clinical psychology at San Diego State University in 1977.  She taught psychology, math, physics, statistics, and parent education in the California Community College system in the 1970s, in both Spanish and English, and took great pride in her ability to support adult students working to improve their lives.

After she divorced, she subjected her child to many camping trips (thanks to San Diego State University's single parents group), potlucks, the ballet, Broadway shows that made their way to LA (Cats, Evita, A Chorus Line) and Shakespeare performances at San Diego's Old Globe Theater. Once they saw Mikhail Baryshnikov in rehearsal. She also loved opera (especially in Santa Fe), Bach, classical piano music, and dancing to any salsa or other music that had some semblance of a beat. Friends filled their house for potlucks and casual dinner parties. Katia’s friends came to value movie nights as much for Becky’s psychological counsel as for the entertainment.

Becky started working at the Naval Personnel Research and Development Center in 1978 as a psychometrician, developing computerized adaptive testing (CAT) for the military’s entrance exam, the ASVAB (the Armed Services Vocational Aptitude Battery). It’s now the industry standard for entrance exams. She transferred to the Department of Defense’s Defense Manpower Data Center at Fort Ord near Monterey when the CAT project went operational. She co-authored an algorithm, the Sympson-Hetter method (1985), a method of item-exposure control used in computerized adaptive testing and widely cited in the psychometric literature.

When her daughter came out in 1991, she quickly rallied to learn more through the local PFLAG chapter and started coming out for her daughter everywhere, even the local car wash, which her daughter suggested was not needed. In 2008, when California residents introduced Proposition 8 to ban same-sex marriage, she joined PFLAG’s campaign to fight the proposition, speaking on Spanish language television about how much she loved and supported her LGBTQ relatives and joining campaign rallies in nearby Salinas.

She faced breast cancer in 1999, and she and her family remained grateful to her treatment providers at Community Hospital of the Monterey Peninsula and its breast cancer support group, where she made many lifelong friends and remained the late Dr. Jerry Rubin’s biggest fan. Her core group of friends gathered each year at the hospital celebration of survivors and those lost to breast cancer. She also became the Unitarian Universalist Church of Monterey’s most devoted non-member. “I’m not a joiner,” she told the pastors, even as she donated to the church.

She retired in 2005, asking only for pajamas as gifts to spend her days in retirement.

When her grandchild, Simon, was born in 2008, she told her friends she finally understood how big your heart could grow when a grandchild arrived. They held a joint membership at the Monterey Bay Aquarium, where Simon tolerated Grandma Becky’s love of the jellyfish and was delighted by the sea otters, penguins and the Grandma-promised stop at the gift shop at the end of every visit. She taught Simon how to make her signature flan dish – which contrary to popular opinion, was not from Cuba but from Gourmet magazine. (She loved telling people that story.)

She moved to Canterbury Woods retirement community in 2015, enjoying volunteering at the library, discussing how to make black beans with the chefs, learning to love dogs thanks to her friend, the late Connie Hamlin, and advocating for closed captions so anyone hard of hearing could participate in committee work during Covid. She and Simon would make short work of the blintzes in the CW dining room. And she always danced, however fast or slowly her body would allow, to the salsa music that filled her childhood and adult life. Luckily, she had friends at Canterbury who would play the piano for her to dance.

She is survived by her daughter, Katia Hetter (Letitia Campbell), her grandchild Simon, her brother Jose Danon, her nephew Samuel Danon (Lucy) and niece Vivette Castro (Jose) and their children, and her cousins Dr. Julio Levy and Rolando Levy (Lourdes) and their children. Another cousin, Simon Levy, and his wife Anita, preceded her in death.

A celebration of life will be scheduled at a later date. In lieu of flowers, the family asks that you donate to the Breast Cancer Assistance Group of Monterey County (please put “In memory of Rebecca Hetter” in the notes field) and make sure to always vote. Becky, as she always told her daughter, didn’t leave a country where her vote didn’t count only to skip voting. https://www.bcagmc.org/

To send flowers to the family or plant a tree in memory of Rebecca Hetter, please visit Tribute Store

Share Your Memory of
Rebecca
Upload Your Memory View All Memories
Be the first to upload a memory!
Share A Memory
Send Flowers
Plant a Tree