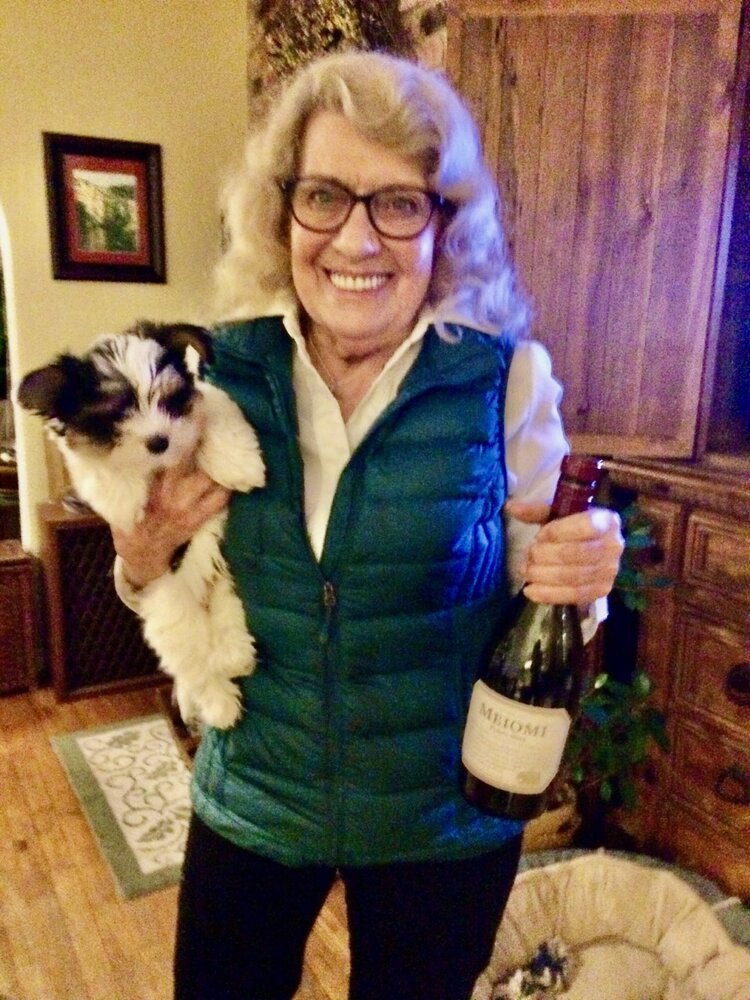 Merry Stephen was born in 1930 in New York City and was named Thelma Grinvalsky. She was raised in Torrington, Connecticut by her Grandparents, along with their 16 “adult” children who were Merry’s aunts and uncles. When she was about 12 years old, Merry entered Convent school and loved to “perform” for the nuns. She had discovered Shakespeare and knew she was going to be a great Shakespearian actress.

After Convent school, at about 17 or 18 years of age, she changed her name to Merry Stephen (Merry, because she liked it, Stephen, after her priest uncle whom she adored). She then moved to New York and attended The American Academy of Dramatic Arts with Grace Kelly. From there, she and Grace went to Hollywood where Merry was chosen to star in a movie. But, she met and married a dashing young actor named Wallace Chadwell, and when the marriage did not last long, Merry returned to the East Coast where her extraordinary son, John Chadwell, was born.

Merry’s son, John, was the light of her life, but sadly passed away in 2001. Of course, that was a very dark day in Merry’s life.

Once back in Connecticut, she had a number of odd jobs. She was the first TV weather girl in the New England States, she appeared with her beautiful smile in toothpaste ads on many billboards, and was a model for designer clothing.

Merry raised her son, John, alone until she met and married Arthur Almagar, Hilton’s right-hand man. During the 1960’s, she and Arthur lived in a beautiful villa in Mexico City and Merry hosted a party for Frank Sinatra in their home. During this time, Merry even managed a bull fighter, and in order to do that, she had to “prove herself” by getting into the ring with a bull…and she did!

After a 15-year marriage to Arthur, they went their separate ways. John, her son, had entered military school, and Merry had remained friends with the Hilton family, so she began her long career of being an integral part of opening Hilton and Regent hotels throughout the world. She opened six in the 1970’s for the Shah in Iran, before the revolution began and the Ayatollah came into power. Merry said she escaped Iran by the skin of her teeth.

While in Tehran and Mashhad, Merry, with her heart of gold, found a way to liberate many young women. She went to the orphanages and took 14, 15 and 16-year-old girls, brought them into the hotels and taught them a trade. She taught them how to work in housekeeping, front desk, etc. Many of the young women met American men and left Iran to start a new life in the US. She has made a positive impact on so many lives.

After living in Iran for many years, Merry went on to open Hilton and Regent hotels in New York, Washington, DC, Hong Kong, Panama City, Santiago Chile, Taiwan, and the Hana Ranch on Maui, just to name a few, with her last hotel, the Anasazi in Santa Fe, New Mexico. In her own words, “she was a woman progressing from the 1950’s when women were not held in esteem in the business world.” She achieved what most women could not in that era: Success in a “man’s world”.

Through the years, she met and became friends with many celebrities. I’ve already mentioned Grace Kelly, but there were others like Marilyn Monroe, Rock Hudson, Tony Bennett, Mitch Miller, Michael Jackson, Cher, Paula Abdul, Oprah, and many more, including Fidel Castro during the Freedom Flights from Havana, Cuba. One time she found her 12- year-old son, John, in the kitchen of the hotel having a beer with Fidel. She took John aside and told him not to bother Fidel. John said Fidel had offered him a cigar, too. Shortly after that, revolution broke out in Cuba and Merry and her son returned to the US. She would later jokingly say that it seemed everywhere she went, a revolution would break out and she was starting to get a complex that maybe she had something to do with it. She had quite a sense of humor.

Although her life was surrounded by celebrities, Merry was never star struck. Family was the most important thing to her. Of course, her son, John Chadwell, Granddaughters, Katherine and Merry Chadwell, a Grandson, Mikey Chadwell, who sadly preceded her in death, and her precious Great-Granddaughters, Cloe and Flora. Also, her many cousins, Andy and Joanie Lach and their familes, Paul Grinvalsky, his sisters, Susan and Peggy, and their families, and her newest family members, Aaron Fishman and his wife Debora, and their adorable little sons, Julian and Benjamin, her cousins, Shelly and Al Rashkin, and her inseparable best friend, Jeanne Osio, and Jeanne’s husband, Efrem, and their family.

But, as much as Merry loved her family, she never met a dog, cat, or any animal for that matter, that she didn’t love. She was always surrounded by furry children, at least two, three, four, or more of them at a time. If someone needed a home for a dog or cat, or even a donkey at one time, no matter how old or sick they were, she would take them in and give them the best care and all the love she could give.

There is one more story we have to mention. Merry had never known her father, and she had been searching for him, or for what happened to him, for many years. Her mother and father had never married, and her father had left New York and moved to the L.A. area about a year after Merry was born. He was a saxophone player and started the first jazz band in Hollywood. Through the assistance of Ancestry.com, and with a few crucial facts, we were able to locate Jacob (Jack) Katz, Merry’s father. He had changed his name from Katz to Keane shortly after arriving in Hollywood. Unfortunately, Jack had passed away many years before we found him, but we did find that he had a wonderful Grandson, Merry’s nephew, Aaron Fishman, along with Aaron’s wonderful wife and their two adorable children. We found cousins and other relatives on her father’s side, as well as a sister, Kathryn Fishman, who sadly had passed away, and another sister, Minna Bachrach. A whole new chapter was added to Merry’s already outstanding life.

Merry loved this quote and it seems so fitting now:

“Life is all memory, except for the one present moment that goes by you so quickly, you hardly catch it going…” Tennessee Williams

Merry was an extraordinary person who touched so many lives. Everyone who had the privilege of knowing her, should feel extremely lucky to have had her in their lives.

To send flowers to the family or plant a tree in memory of Merry Stephen, please visit Tribute Store

Share Your Memory of
Merry
Upload Your Memory View All Memories
Be the first to upload a memory!
Share A Memory
Send Flowers
Plant a Tree